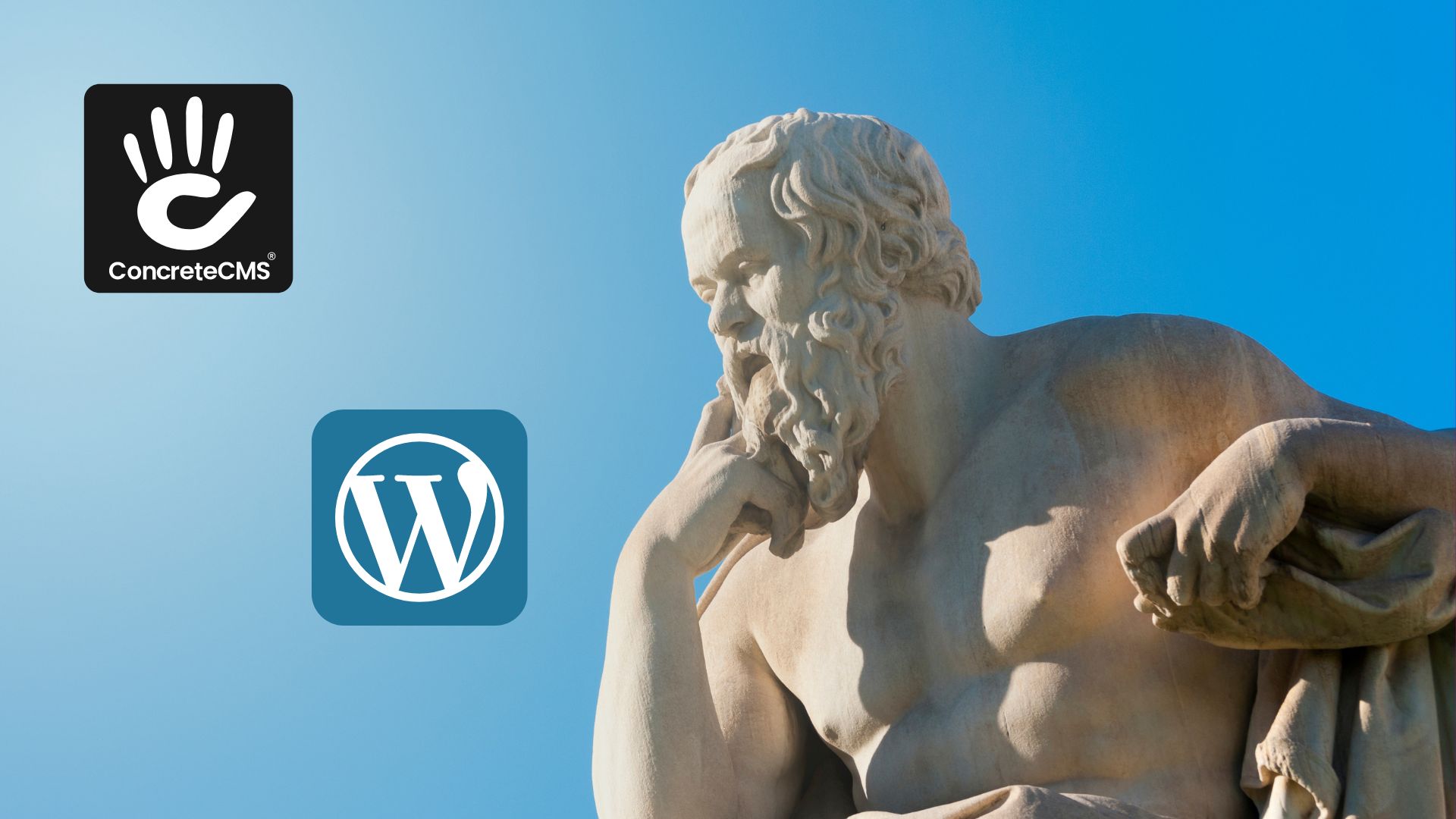 Wordpress And Concrete CMS A Philosophical Difference In Adding Features

Many many years ago when we were a full service web shop, a prospective client came to me with an existing Drupal site they wanted someone new to take over. They asked a perfectly reasonable question: “how much would it cost to make this site also do something or other.”

Set Up A Demo

I still remember the sinking feeling as I realized; I have absolutely no idea, and it would take my engineers spending at least several days with this codebase for me to feel comfortable putting a fixed bid on that request. This client thought they had bought something specific when they approved ‘Drupal’ as a product, but the reality was there were dozens of competing 3rd party modules for essential functionality that their old developer had used, and as a new shop we had no idea what we were going to find in the code base.

Can you imagine calling a plumber for an estimate and being told the only way to get a sense of cost will be to tear all the walls apart so they could inspect each pipe?

That’s what we were doing in the industry, and as a business person it disappointed me.

I’ve kept that experience close to my heart as our internal toolkit became Concrete CMS. Our philosophy is that a good content management system should give 90% of customers 90% of what they need to run 90% of websites. Yes, we have a marketplace full of add-ons and themes, but ideally we see those packages as the last 10%. Maybe it’s a great looking theme that will make your site stand out from your competitors. Maybe it’s a bunch of functionality that uniquely serves the needs of a particular market. Maybe it’s even a more powerful version of some basic functionality. That said, when we look at a marketplace extension and think “well every site needs one of those” - our immediate gut reaction is to think of ways to include it in the core.

Obviously, this does not always delight the developers making these extensions. They’ve identified a hole in our product offering, built a solution, are selling it with success, and we come along and fold similar functionality into the core. That’s not a great way to treat your partners. We try to do our best to communicate around it, but yeah, fundamentally that’s just going to suck from time to time. The reason we’ll do that is the memory of that poor business owner who wasn’t particularly interested in if Drupal was open source or not, but just wanted to have a website that worked and could be extended by someone who wasn’t the person who originally built it.

Can you imagine if Ford sold you a car, but to drive it out of the dealer’s lot you had to engage with a dozen different vendors to get it driving?

Ford’s don’t come with brakes or a steering wheel, it’s more of an automobile framework than a street ready vehicle. Isn’t it cool how you’re supporting a diverse ecosystem of car part developers with your commitment to the Ford community though?

No, frankly that customer just wanted to get from point A to B in a safe way that makes a lifestyle statement. If they wanted to build a car, they wouldn’t be at a dealership.

WordPress has become the Kleenex of the web with a double digit market share. In the early days much of WordPress’s success was tied to the easy install they pulled off. Most other solutions in the aughts were complicated to even install, and once you got it running you were presented with a blank slate. WordPress captured a lot of love early on because you didn’t have to be an engineer to set up a new site, just a couple of clicks and anyone could be blogging about their cat. They were right to focus on that onboarding early on, but now there are plenty of SaaS platforms that deliver a business owner friendly experience.

WordPress has started to feel more like Drupal to me back in the day. Talk to a great WordPress developer and they’ll tell you the first thing they do is install a dozen extensions for features as basic as SEO or a contact form. There are extensions out there for keeping your extensions up to date. From the outside it feels like that hilarious SnL Taco Town bit where someone who just wanted a taco is strung along through a ridiculous journey of choices they never wanted to make.

I know WordPress talks about offering “decisions not options” to their users in an effort to avoid the checkbox trap of a lot of open source software. I also know the more customers you have using a piece of software, the harder it is to change it. People depend on something working the way it does. Even if that way has clear issues in retrospect, changing it later can cause more pain than you’d imagine.

The recent back and forth over adding WebP support to the WordPress core was pretty telling. This new improved image format will make websites faster and is generally considered a good thing (we’ll be folding more support for it into the core in the future.) The downside of that double digit market share is when WordPress decided to include it in the core and turn it on by default (decisions, not options) someone pointed out they were going to break a huge chunk of the web because so many budget hosting WordPress sites were out there running at near disk storage capacity, that automatically generating all of these new images was a real problem. Debate ensued, and they ended up pulling the feature back out.

That’s a pretty frustrating position to be in as a technology leader. It sucks to have a compelling feature ready but be unable to deliver on that because of the competing needs of a community that tries to be everything to everyone. I understand why Ma.tt has started talking more about pushing functionality out into “canonical plugins” that are not part of the core, but still recommended by the core. It feels like a compromise that might make the loudest developer voices somewhat happier, but it really doesn’t feel like it’s going to make things easier for the end site owner.

I can’t say if I’d make different decisions in his shoes or not, but what I can tell you is that Concrete CMS does an awful lot in the core that other open source content management systems depend on 3rd party tools for.

With Concrete you get:

In WordPress, each and every one of these things is a separate tool from a separate development shop that may or may not keep it updated over time. With Concrete, you can count on all of that stuff working consistently from one site to another. Two developers can make two different add-ons that show calendars in different ways, and they should both be able to work on the same site, showing the same events.

We’re certainly not always perfect about it, and upgrading a CMS is never going to be painless. Even with our approach, I know we’ve got themes that are still not version 9 ready ourselves - so I get the pain. That said, you can count on us to continually ask “shouldn’t a CMS actually ship with everything a site owner needs to manage content safely?” You can count on us to make hard decisions in an effort to build a web where a webshop can make some assumptions about taking over an existing site and actually provide a free estimate that’s fair to everyone, just like my plumber can today.

The Complete Guide To Accessible Navigation

When website navigation is broken or difficult to understand, web content becomes inaccessible. Websites must provide navigation to users who may not be able to see or interpret the navigation menu.

Much like the best time to plant a tree was 20 years ago, if you’re not already tracking your search data in detail you need to start today.

Different solutions emerge to attract visitors to your online store and encourage them to stay longer. Let’s take a look at the top eCommerce trends.